Daughters of drag racing sportsman legend Randy Meyer, Megan and Rachel Meyer, made their “Meyer Sisters Racing: Double Trouble” national debut at the 2017 NHRA Menards Heartland Nationals presented by Minties Dog Treats. Megan and Rachel were supported by Weld Wheels for the event, a company that is based out of the Kansas City area and maker of the lightest and strongest drag racing wheels.

The girls finished qualifying in the second (Rachel: 5.24 E.T. at 277 mph) and fourth (Megan: 5.28 E.T. at 278 mph) positions, paving the way for an all Meyer final round. Megan was first on the track between the two and had a bye run as her opponent had a fuel leak. Megan shook the tires around 100’ and shut off the car, coasting to an 11-second run and forfeiting lane choice. Rachel followed with an outstanding 5.22 E.T. at 276 mph over Dean Dubbin and gets her first National event round win.

Round 2 of eliminations kicked off on Sunday, and this time it was Rachel who ran before Megan. Rachel faced Robin Samsel and left the starting line before him and never looked back, crossing the finish line with a 5.25 E.T. at 274 mph. Megan was defeated in the quarter-finals by Jackie Fricke as she had even more tire shake. This run was more violent than the prior run and they will have their hands full repairing the parts and pieces on the car before their next race.

Rachel made her way to the final round of eliminations, but not before taking out James Stevens who disqualified himself with a red light start. Rachel ran a slower 5.29 E.T. at 272 mph in the semi-finals, and gave up lane choice to Shawn Cowie for the closing round. Rachel and Shawn had identical reaction times, but this time it was Rachel who shook the tires and lost traction around half-track and tried to stay on for a wild ride, but was not able beat Shawn to the finish line.

“I am still smiling at the fact that I even made it...
Continue...
Weather Limits Norwalk Regional Making it a Guessing Game
0 1,183 by News Editor : May 22, 2017 at 1:55 PM
Norwalk, Ohio - Unseasonable wet weather made the"Cavalcade of Stars" NHRA Regional event a challenge for all competitors to read the track. As a result of the rain, the Top Alcohol Dragster class only got one qualifying pass thus limiting the amount of data collected. But, Duane Shields in the PEAK A/Fuel dragster made the best of it and qualified fourth with a 5.48 at 264 MPH during the exciting one shot qualifying session.

In round one, Duane faced Jared Dreher who qualified fifth with a 5.53 at 242 MPH. As the lights came down, Dreher got an advantage off the starting line. Other than the slight lead, it was a fairly even race all the way down the track with Dreher tripping the win light with a 5.43 at 264 MPH to Duane's close 5.45 at 270 MPH. “We didn’t give it enough power and it stuck the tires. The track was tight and because we only got one qualifying pass before eliminations we just didn’t have much to work with” Duane said.

​
Provided by Randy Meyer Racing / Pictures Randy Meyer Racing​
With her college graduation coming up, Rachel Meyer has had her hands full this year completing a degree in Mechanical Engineering, racing her Super Comp dragster at the local drag strip, and preparing for her NHRA National Event debut in one of the Randy Meyer Racing Team’s Top Alcohol Dragsters. 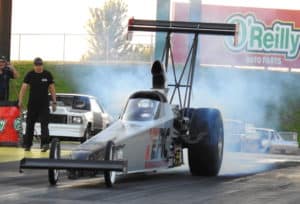 ​
Rachel will hop into the seat of her father’s A/Fuel dragster during the 2017 Menards NHRA Heartland Nationals presented by Minties Event on May 19-21 at Heartland Park Topeka. Rachel currently shares the driver’s seat with the newest member of the team, Justin Ashley, who raced the dragster in the Gainesville GatorNationals and Charlotte 4-Wide Nationals earlier this year. Justin walked away with a win and runner-up finish in his first two Top Alcohol races, and Rachel has high hopes for her debut as well.

“My feelings going into my first big event isn’t being worried about driving the car down the track or even helping my dad tune the car, but about talking to the media and all of the fans,” said Rachel. “I’m excited to race my first big event and excited to show the world what I can do. My favorite part about racing is the adrenaline rush. Whether it be racing over 270 MPH or just bracket racing and trying to cut a light as well as racing the top end, it is just amazing. It makes you want to keep racing even if your car isn’t doing the best or is inconsistent.” 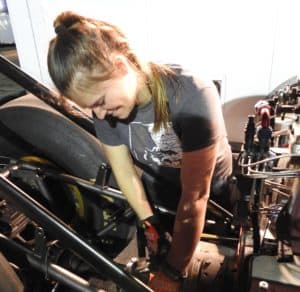